The true worth of a composer is predicated upon their picture appearing on bubble gum cards, according to preeminent musicologist Lucy Van Pelt, pictured at right. George Gershwin sets an even higher bar by having his life story featured in no fewer than three comic books, but we’ll get to that later.

As I researched Gershwin in comic books, I stumbled upon George and Ira’s first cousin Emil Gershwin, a renowned comic book artist during the 1940s and ’50s!

I had to know: Who was this very talented and relatively unknown Gershwin, and what was it like to be the much younger cousin to his world-famous relatives? Emil’s daughter Nancy Gershwin was kind enough to tell me a bit of her father’s story:

First off, let’s get his name straight: Emil’s name’ll be pronounced AIM-uhl (rhymes with “name’ll”).

Born in 1922 in New York City to Aaron (George’s uncle) and Zena Gershwin, Emil Gershwin showed artistic talent early in life. He left DeWitt Clinton High School in the Bronx at age 15 to attend The Art Students League of New York. He went on to draw for the comic books Starman, Kid Eternity, Flash Gordon, Dick Tracy, Captain Marvel, Sadface Charlie, Spy Smasher, and Justice Society of America as well as drawing for many crime and adventure comic books over a 20-year career. 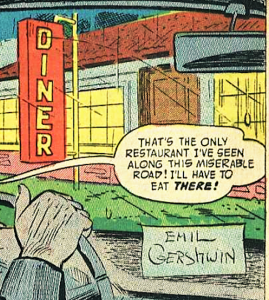 Emil rarely signed his name to his work and even used the pen name “Peter Abbott” at times (a play on Peter Rabbit, as his mother’s maiden name was Abbot), similar to the way his cousin Ira was unwilling to take unearned advantage of the prestige of the Gershwin name.

Emil’s daughter Nancy described her father as a perfectionist, and she recalled that he looked back on his output as a comic book artist more with amusement than with pride. He was particularly surprised at the dawn of the internet age, toward the end of his life, that people were inquiring about and admiring his work. After Emil passed away in 1999, it was Alex Toth’s huge admiration that brought Emil (posthumously) even more into the spotlight.

What Other Comic Book Artists Have Said About Emil:

Cartoonist Terry Beatty: “Seeing how good [Emil’s] work is, I’m surprised there isn’t more fuss made about the man in comics circles.”

Below are just a few examples of Emil Gershwin’s comic book art: 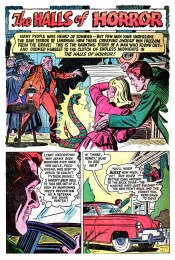 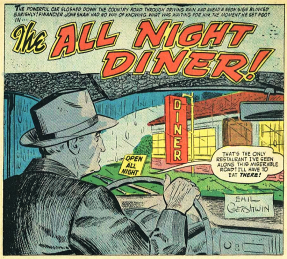 Below are some examples of Emil Gershwin’s commercial and fine art, images courtesy of Patty Gershwin and Nancy Gershwin:

And while we’re at it, here are a few examples of George Gershwin’s telephone doodles and George painting a portrait in oils, images courtesy of Nancy Gershwin: 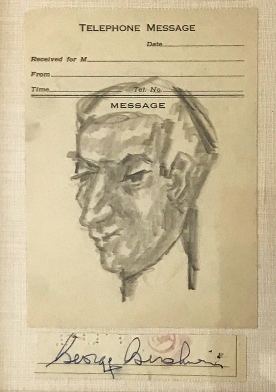 Emil and His Cousins George & Ira (and even Arthur!)

By the time Emil was born in 1922, both of his famous Gershwin cousins had firmly established themselves as Broadway tunesmiths. But as Emil grew, he did occasionally get to spend quality, if not quantity, time with the cousins. Nancy Gershwin had one particularly unconventional story about her father at a Gershwin family gathering, where Emil shared the stage with his cousin George at the piano:

“George used to teach him to sing George’s songs. George would prop him up on the piano and have him sing.  Well, once when my father was about 4 years old, George actually got him drunk! Looking back on it, my father thought it was hilarious when he would talk about it.  You have this drunken little kid on a piano singing Gershwin songs, entertaining everybody.”

Besides having the George Gershwin as his accompanist, Emil had a special fondness for this particular cousin because, as Nancy described it, “George was just like a big kid, and my father was so impressed that George used to walk across the room on his hands. That was as cool as you could get!”

“For my cousin Emil — Every good wish, George Gershwin, May 17, 1932,” courtesy of Nancy Gershwin

At the age of 10, Emil said to George, “The kids at school don’t believe you’re my cousin. Can you give me some proof that I can show them?” George gave Emil an autographed photo which always had a place on his wall near his photo of Ira.

When George died in 1937, Emil was 15 years old and attended the funeral in New York, fully aware of the tragic loss to both the world of music and to himself personally.

Ira, being the more reserved cousin, may not have made the same, high-spirited impression that George did. Emil did visit Ira and Ira’s wife Lee at their home in Beverly Hills. As Nancy told it, “There’s no one who couldn’t like Ira. Ira was lovely, and he and his wife allowed my father to stay there a while, and they were just very gracious. My father told me that he remembers Ira being so proud in the 1940s that Lee and Ira’s house was fully paid for. That was a big deal for Ira.”

Nancy, as a young girl, wrote a letter introducing herself to Ira (the letter is now in the Library of Congress among Ira’s correspondence), and he responded with the letter seen here (at right). After offering to send the musically-minded Nancy his songbook, Ira did come through and sent her a signed copy of The George and Ira Gershwin Song Book later that month, September 1965. (See photo at bottom of page.) 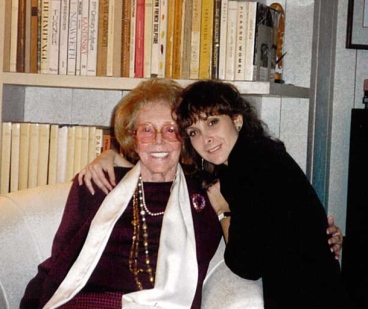 Nancy became very close to Lee Gershwin, who invited her to move in after Ira died in 1983. Though she didn’t move in, she was able to spend a great deal of time with Lee at the Roxbury Drive home.

Nancy Gershwin’s memories of her father include his playing George’s relatively obscure but dramatic “Song of the Flame” on the piano (heard here from the Clayton Hallowell piano roll), as well as “Swanee,” “Somebody Loves Me,” and “Lady, Be Good.” Another fond memory of her father was his nightly singing of “They All Laughed” to her when she was very young, in what she described as his “very beautiful and natural” singing voice.

Emil Gershwin withdrew from the comic book world in 1960 and focused on business and investing. I asked Nancy if this brought Emil closer to Arthur Gershwin’s world, since Arthur was a stockbroker by trade (when he wasn’t writing songs). She said that Emil liked Arthur and had nice things to say about him, but their work in the investment world did not intersect.

It’s your typical family story: The younger cousin goes from singing as a drunken toddler to making world-class comic books. And through a lot of talent, hard work, and dedication to his craft, Emil was able to achieve a level of mastery worthy of the creative standard set by his older cousins.

Thanks to Nancy Gershwin for her help telling this story. You can read more about Alex Toth’s thoughts on Emil Gershwin’s work at Nancy’s website. And while you’re there, don’t miss a wonderful Telly Savalas tale from the show “The Extraordinary,” which Nancy executive produced.

The tragic, early end to Gershwin’s life gives his story an added level of drama not afforded to your average octogenarian composer. Combine that with his rags-to-riches ascent, prolific creative output, and vivacious personal charm and you have all the makings of an inspirational tale for all ages to appreciate.

Whether young comic book readers of yore found his bio of any interest, I can’t say, but the comic book writers and artists sure gave it their all. You’ll find the likes of Oscar Levant, Fred Astaire, Paul Whiteman, Al Jolson (whom I Photoshopped to remove the blackface), and even an occasional Ira (who sadly never got his own comic book.) 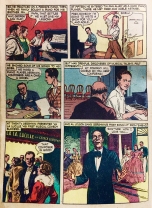 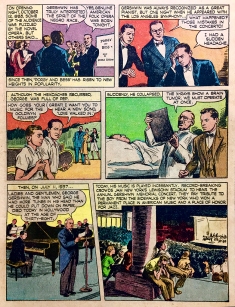 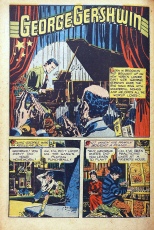 I discovered one more George Gershwin comic book, Vidas Ilustres #135, and this one was devoted entirely to Gershwin! The only problem was that it was written in Spanish. Fortunately, I was able to use my Spanish degree for the translation into English and my art degree to handle the Photoshop work. And you can download the PDF to the whole thing here: Illustrious Lives Gershwin

“They have never been published and are not worth bringing up,” Gershwin said about his early piano preludes that he called Novelettes. This piano prelude dates from around 1919, and we know that because Gershwin recorded it onto a piano roll in that year (heard here).

I won’t spend time discussing the work, except to say that it has more in common with his ragtime tune “Rialto Ripples” than it has in common with any of his other piano preludes, though it is often listed as a “prelude.” (See downloadable sheet music below.)

You can download the complete sheet music, midi file, mp3 etc. to “Novelette in Fourths” free at MuseScore. 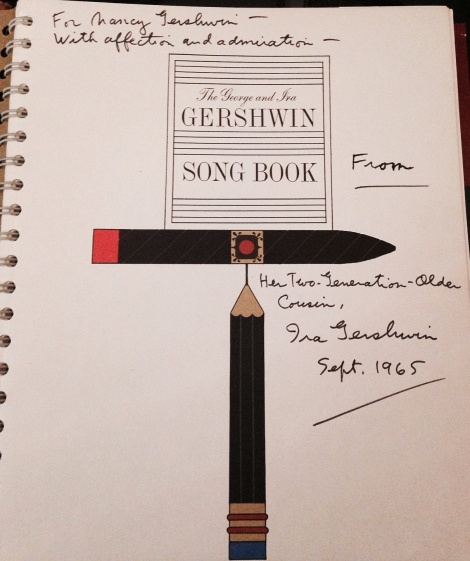 “For my cousin Emil — Every good wish, George Gershwin, May 17, 1932,” courtesy of Nancy Gershwin 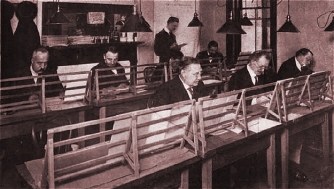 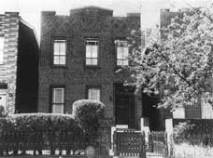 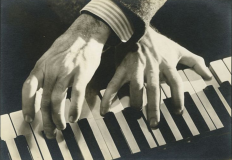